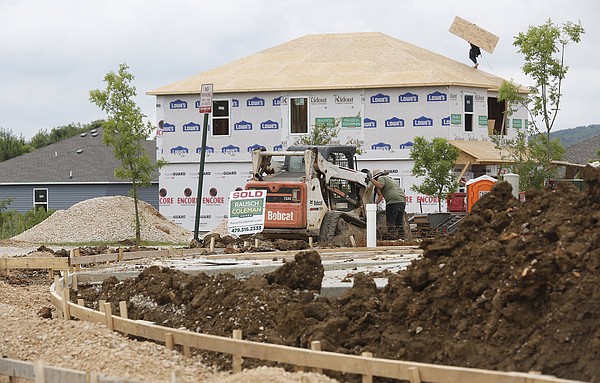 Over the past two years, that price has climbed to $36,000, said Alan Risley, construction supervisor at the nonprofit Crawford-Sebastian Community Development Council in Fort Smith.

That’s not the only hurdle faced by builders and new home buyers in Arkansas and across the country. The same amount of shingles for a new roof costs $1,000 more than it used to, Risley said. New windows used to arrive two weeks after being ordered, but now take at least 13 weeks.

“It’s the worst possible scenario, interest rates go up and materials go up [at the same time]because usually one or the other is going to save you money on your monthly payment,” he said.

Prices for most building products are determined by supply and demand, and prices rise when supply is low and demand is high, said Keith Wingfield, president of River Rock Builders in Little Rock.

“Confidence among our builders is now down, in terms of economic conditions for construction,” Wingfield said.

Additionally, gasoline prices have been higher than average for months, forcing contractors to charge more for travel, and some building and weathering materials are scarce on store shelves. These issues have caused “heartache” both for low-to-moderate income families hoping to become homeowners and for the agencies in Arkansas helping them take that step, Baker said.

The council’s mission is “to improve the lives of low-income individuals and families” in the Fort Smith area, according to its website. Part of that effort includes building homes in Fort Smith with low monthly mortgage payments, but high construction costs can drive up that monthly payment and shut people out of the market, especially because contracts with strict budget caps are established months in advance, Baker said. .

“By the time the house is built, the material costs are much higher than they were when [the owners] signed this contract,” he said.

One way to avoid going over budget is to build a smaller floor plan, but that might not be viable for larger families, he said.

“If you have five kids and you want a four-bedroom house, you’re going to have to squeeze in a three-bedroom house now,” Baker said.

The Crawford-Sebastian Community Development Council typically builds eight to 10 homes a year for low-income families, with qualifications varying by household size. The maximum annual income for a qualifying family of four is $43,450, said the council’s director of rural housing, Michael Fuchtman.

The council also runs a weather protection program to protect homes from extreme temperatures and rainfall. This protection not only keeps the home in good structural condition, but keeps homeowners’ utility costs down, said Beverly Palmer, director of the weatherization program at the Central Arkansas Development Council, a nonprofit agency that helps homeowners. Low-income Arkansans in 19 counties.

Weatherization includes applying caulking, insulating walls, putting weather stripping under doors and installing smoke detectors and carbon monoxide detectors, Palmer said. Owners and renters of single-family homes and mobile homes are eligible for the council’s weatherization program if their annual income meets 200% of the federal poverty guidelines. A one-person household would qualify with a maximum income of $27,180 per year.

“[People] want to reduce their energy use, and the longer it takes to do a job, the more fuel they will use to heat or cool their home,” Palmer said. “They will continue to have high bills until we finish this job.”

Funded by federal grants, the Central Arkansas Development Council typically cools 150 to 175 homes a year, but that number could decline due to supply chain issues and depending on future funding amounts, Palmer said.

Building energy-efficient homes is a “sound investment” that any new homeowner should make if they are able, said Wingfield, whose construction company builds homes with net-zero energy costs.

“The idea is that you won’t have a choice between your rent or mortgage payment and your utility bill,” he said. “You’re going to pay for your energy costs along with the house. It’s just as expensive as owning the house.”

Wingfield is a board member of the Arkansas Home Builders Association and a state representative to the National Association of Home Builders. Earlier this month, the national organization released a statement in response to President Joe Biden’s housing supply action plan, which aims “to ease the burden of housing costs over time by increasing the supply of quality housing in each community,” according to the White House. Press release of May 16.

The plan also includes a reduction in rental rates, and National Association of Home Builders President Jerry Konter said the plan would “help address a host of affordability issues,” according to a press release from the same. day.

“We agree with the White House that the key to solving housing affordability issues in our country is to build more homes,” Konter said. “NAHB looks forward to working with the Biden administration and Congress to provide a comprehensive, long-term solution to the affordability crisis that will allow builders to build more affordable entry-level housing.”

Meanwhile, demand for new homes, regardless of homeowner income, “has really stalled” due to high material prices and interest rates, Wingfield said.

“In some cases, it will help the supply chain because it will reduce pressure and demand for products,” he said.

Unlock Your Asset – The Hindu